When the Common Core Standards were introduced in the educational field, there was an immediate reaction to new ways of teaching and learning as many teachers were not familiar with a model of inquiry, relevant learning, and student centered instruction. For more seasoned teachers, the integration of Common Core Standards were kind of a return to a teaching approach where creativity and student thought were seriously taken into account during curriculum planning.

As I continue to engage in reading the work of educational philosophers who have impacted teaching approaches in the Century 21st classroom, John Dewey and Paulo Freire offer similar perspectives that I believe influence Common Core Practices. Both of these philosophers believe in a student centered approach with freedom of action and thought. They are critical of students being "repositories" of information and advocate for an active, relevant, and authentic approach to learning where students are engaged in designing educational experiences. Dewey and Freire advocate for knowledge to be the key component to a transformative power that comes from every learner and the way they impact their world through critical attitudes and dispositions. This is certainly true for the 21st Century classroom where technology serves as a vehicle to expand, refute, recreate, and promote new ways of thinking. I have created a simple comparison chart of the main ideas between educational philosophers and thinkers John Dewey and Paulo Freire. 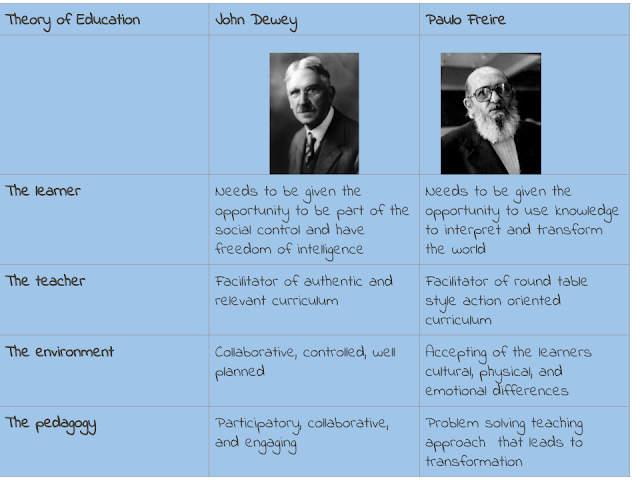 Posted by educatortalk at 11:29 PM